Today, networks carry more information — and more types of information — than ever before. The ubiquity and cost of network technology has forced U.S. government officials at every level to consider outsourcing its management to the private sector. But what does that implementation look like, exactly? We take a look at this and more in our latest Ascend article.

In a world where networks serve as the foundation for most transactions in both the private and public sectors, why would governments decide to outsource their network functions? After all, these systems contain sensitive information that could severely compromise the public interest were it to fall into the wrong hands. If officials at every level of government have a vested interest in maintaining control over this information, why would they entrust its management to companies in the private sector?

The answer primarily comes down to a surplus of information and a lack of resources. When government leaders find themselves without the skilled personnel necessary to undertake a network project, they can either hire more people or outsource the project entirely. Since the early 2000s, when network technology began to touch every aspect of public and private life, more and more regulators have opted to choose outsourcing as a solution to their network requirements.

Here we will look at how the U.S. network outsourcing effort has played out over the past 30 years, breaking down attempts at both the state and federal levels to reward contracts to private companies without sacrificing basic control over their networks.

Outsourcing at the federal level

A prime example of attempts at both in-house networking and outsourcing can be found in a U.S. government agency that played a formative role in the development of the internet in the first place: the Department of Defense (DoD). Though the department sought to establish a central network as a foundation for both weapons systems and communications networks, this would prove a daunting task, as early networks were locally organized with no central facilitation.

The Clinger-Cohen Act (CCA) of 1996 represented a legislative attempt to create a standard for IT development across federal agencies. The act forced government leaders to carefully consider their acquisition of IT systems, weighing cost, timeliness, and adaptability. It also incentivized these agencies to consider whether a new IT system would be better handled through the private sector. In the end, the legislation proved inadequate for the DoD, with the agency’s Inspector General rating IT oversight as one of its biggest management issues in a 1999 report.

When the U.S. Congress transitioned to a Republican majority in the late 90s, calls for outsourcing and reductions in infrastructure spending increased. The 1997 Quadrennial Defense Review set a precedent favoring outsourcing that would continue as the Bush administration took power in the early 2000s. Importantly, the 1998 FAIR Act forced federal agencies to identify each of their activities as commercial or inherently governmental. This distinction would play a major role in agencies’ outsourcing decisions in the early 2000s.

The definition of an “inherently governmental” activity, as outlined by the FAIR Act, was broad enough to be interpreted differently by different DoD organizations. In 2001, the Comptroller General provided national defense and law enforcement as examples of these types of applications, advising that functions directly involved with these activities were to be overseen by federal employees, while functions supporting these activities could be outsourced to the private sector. The elasticity in the definitions of core and non-core functions led to a disparity in the development of IT systems across different DoD organizations.

The Navy, for example, attempted to develop its own systems in-house around the turn of the century, but limitations in budgeting and personnel crippled this approach. A report from Navy CIO Dan Porter in 2008 acknowledged the failures of in-house development, citing the organization’s patchwork infrastructure and expertise limitations as reasons to move toward outsourcing. The Army, on the other hand, outsourced more freely in the early days of network development, because IT was not considered part of its conventional wartime activities, before attempting to establish more in-house control in the early 2000s.

At the state level, the question of whether to outsource network operations or maintain them in-house has been similarly complicated. An example of government leaders attempting to juggle the two approaches can be found in the early 2000s, when Oklahoma began to build its own statewide network, known as OneNet. State agencies noticed an immediate benefit, with the Oklahoma Department of Human Services, for example, saving a quarter of a million dollars a year in budget costs after switching to the state network.

Despite the desire of government leaders in Oklahoma to maintain control over OneNet, officials knew from the start that certain compromises would have to be made regarding outsourcing. They worked with phone companies in the development of the state network because these companies had the infrastructure and staff to lend their expertise without sacrificing the state’s overall control over the system. The state network now facilitates services that range from education to telemedicine, court operations, and beyond.

The early heyday of network outsourcing in digital government was defined by large-scale contracts between government leaders and private companies. Connecticut, for example, attempted to outsource its entire IT operation in the early 2000s to systems integrator EDS under a contract that cost the state an estimated $1.35 billion over seven years. Around the same time, San Diego County outsourced a large part of its computer systems operations to Computer Sciences Corporation in a $500 million dollar contract that lasted 10 years.

These massive deals in network outsourcing during the early 2000s only worked out for a handful of states. Overall, Big Tech firms have been unable to provide the level of service needed by state leaders. In Texas, an effort to outsource network operations to IBM, during which the company would attempt to consolidate information from 27 state agencies into two data centers, proved a failure. Officials rebid the $863 million contract in 2010, breaking up the consolidation across multiple contractors.

The future of network outsourcing in digital government

Even Georgia, a state whose outsourcing effort was largely successful, has chosen to pursue smaller contracts from a variety of vendors in recent years. Virginia, too, announced its intentions to use a multi-supplier model in July 2019. But with the U.S. National Security Agency (NSA), for example, rewarding a $10 billion cloud computing contract to Amazon Web Services in April 2022, it remains difficult to determine what the future holds for large-scale outsourcing deals.

One thing is for sure: as long as government officials face restrictions in personnel, expertise, and budgeting, there will remain an incentive to pursue network outsourcing over in-house management. Moving forward, it is likely that public leaders at every level will attempt to balance the two approaches as technologies like cloud computing play a larger role in governmental operations, outsourcing for infrastructure and expertise while attempting to maintain control over functions that directly involve and affect the public interest.

Get the latest news and views on regulation and digital government.
Click Here

In the wake of a tumultuous year for cryptocurrency, governments around the world are making moves to regulate digital currencies. While recent headlines suggest a flurry of scattered efforts to apply rules to govern cryptocurrency and its exchanges, this is a continuation of a regulatory trend.

Crypto’s history with regulators, lawmakers, and enforcement agencies spans a decade, but it can be challenging to make sense of it all. In the first part of this series on the history of cryptocurrency regulation, Ascend contributor Sean Gellis explores how the two have intersected over time, taking us back to the origins of digital currency and a comprehensive timeline of early cryptocurrency regulation in the U.S.

Every day of the year, Ascend Magazine tracks new and ongoing news, issues, and events in regulatory licensing and digital government. We went through all the stories in 2022 to bring you the five biggest themes we saw throughout the year.

In Part 2 of our Q&A series with Ahpra CEO Martin Fletcher, we discuss the impacts of COVID-19 on health care regulation and the promise of data-driven technology in the public sector. 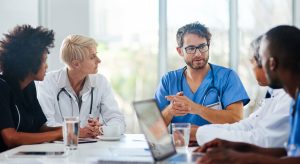 The Week in Brief is your weekly snapshot of regulatory news and what's happening in the world of professional licensing, government technology, and public policy.
N.L. doctors oppose proposed government say in licensing, New Mexico licensing department hit by cyberattack, Virginia moves to lower barriers to teacher licensure, and more in our weekly look at regulatory news.

Bailey Crotty sits down with Ascend Radio to discuss the Oklahoma Real Estate Commission (OREC) and its massive transformation to a cloud-based digital licensing solution.

Written byJordan Milian
Jordan Milian is a writer covering government regulation and occupational licensing for Ascend, with a professional background in journalism and marketing.

MOST READ BY SUBSCRIBERS

The content on this site is produced by Thentia Corp. and is for informational purposes only. The content is not intended to be investment advice or any other kind of professional advice. Before taking any action based on this content you should consult a professional. We do not endorse any third parties referenced on this site. When you invest, your money is at risk and it is possible that you may lose some or all of your investment. Past performance is not a guarantee of future results. Historical returns, hypothetical returns, expected returns and images included in this content are for illustrative purposes only. By using this website, you accept our (Terms of Use) and (Privacy Policy). Copyright 2021 Thentia Corp.

Get essential news, insight, and commentary on regulation and digital government.
FOLLOW US